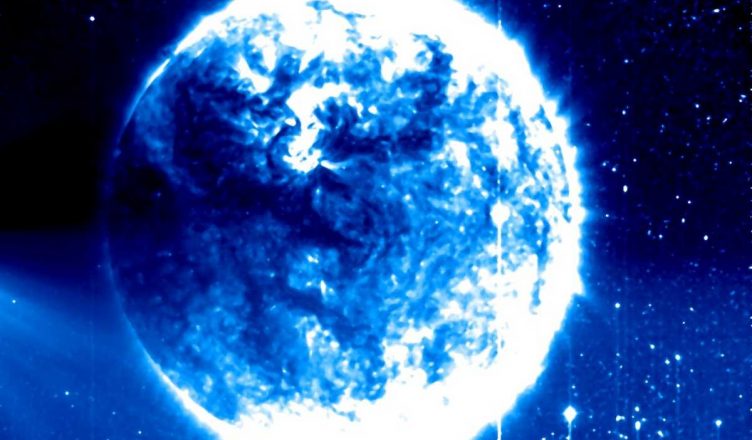 If you’ve read some reports going around the web that this is a giant sphere that’s coming towards earth, then, sadly you are misinformed. A number of people are already reporting what is correctly being shown, which is, in fact, a ghosted image from another camera on board the STEREO spacecraft. Think of TV station cross-talk wherein, one station has the ghosted imagery from another station superimposed.  For more of an explanation read on below.

YouTuber BPEarthWatch, has put forth a very compelling case that – this cross-talk of camera’s onboard the craft – is the real reason for what we’re seeing this image artifact.

Also, it’s also pointed out on the STEREO website that, this can happen during transmission, due to overloading of the image processors.

On rare occasions, the SECCHI image processor onboard STEREO becomes overloaded, and produces corrupted images. Generally, these take the form of images from one telescope processed as if they were from another telescope. Because the images from the Heliospheric Imager (HI) telescopes are built up from a large number of exposures added together, this sometimes results in “double exposures”, where data from several telescopes appear in the same image. Instances of large numbers of corrupted images are usually tracked on the STEREO Coordinated Observations Calendar pages.

It’s only a Glitch

This is not a spacecraft decloaking and showing itself momentarily. If you’ve been informed that this is aliens or spacecraft de-clocking, please review your sources of news and information for both quality and authenticity. Should a spacecraft de-cloaking be caught on camera I would most certainly be reporting on it here. So, for now, please don’t worry.