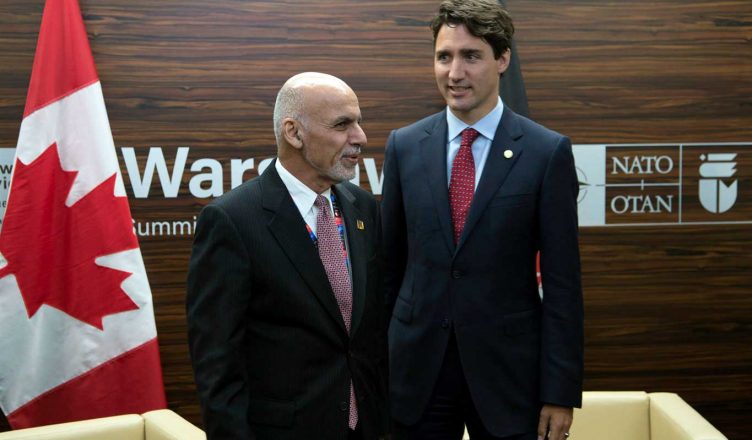 The Military of Canada is sending 450 soldiers to Latvia next year at the cost of $348.6 Million over three years. All in the name of more supposed Russian aggression. The Montreal Gazette has an interesting article detailing how Russia isn’t a threat, but sending NATO soldiers there will cause more harm than good. It contains a video from Canadian President Justin Trudeau, announcing the deployment. The Canadians are likely to be deployed early next year, likely May 2017.

Well as far as I’ve seen in the last couple of years, the build up in the Baltic states has been instigated by the West, with NATO deploying ever larger numbers to the region in war games exercises and new permanent battalion placements in the area. It’s a constant cat and mouse game with each taking turns to one-up the other on position. However, it’s really all smoke and mirrors, designed to keep us in fear and for a small insidious group to try and provoke a world war.

It’s NATO and the USA that have built Anti-Ballistic Missile systems in Poland and Romania, with the Romanian system now being online.

The Russian president Validmire Putin has previously gone on the record during a visit to Greece earlier in the year to say that.

“If yesterday people simply did not know what it means to be in the crosshairs in those areas of Romania, then today we will be forced to carry out certain measures to ensure our security. And it will be the same with Poland,”

“At the moment the interceptor missiles installed have a range of 500 kilometers, soon this will go up to 1000 kilometers, and worse than that, they can be rearmed with 2400km-range offensive missiles even today, and it can be done by simply switching the software, so that even the Romanians themselves won’t know,”

“We have the capability to respond. The whole world saw what our medium-range sea-based missiles are capable of [in Syria]. But we violate no agreements. And our ground-based Iskander missiles have also proven themselves as superb,”

“NATO fend us off with vague statements that this is no threat to Russia… That the whole project began as a preventive measure against Iran’s nuclear program. Where is that program now? It doesn’t exist,”

Clearly, Russia is becoming increasingly distressed with the actions of NATO and the media as he’s previously been heard saying at a financial summit earlier in the year…

…this in reference to the media no reporting on these issues and instead blindly pushing more propaganda feed to them by the west. Russia like every other country isn’t perfect, but they certainly aren’t causing half the mayhem that the West’s established Cabal is doing.

Apparently, these moves by NATO go against the accords developed at the end of the cold war, for neither side to encroach closer. NATO has since then flagrantly dismissed this accord by inviting into its alliance former Soviet states. That now means NATO is boarded up directly against Russia in many areas.

The situation with Ukraine is a mess, and the only thing for certain is that both, the West and Russia have actors in play, and both sides have some form of vested interest and agenda. It’s another proxy war to some extent, and it’s the people that suffer from this continued aggravation in the region.

Crimea seems to have passed by reasonably smoothly since it’s annexation by Russia. The arguments over annexation are well debated, but I would remind my readers that Crimea has most of its history attached with Russia and a vast amount of the people there speak Russian. There are winners and losers on both sides in any situation, but the transition back then was very peaceful. Currently, Crimea seems to have been brought back into the Russian fold. Now fortified and protected it’s at least more stable than it has been for awhile.

For me, I honestly don’t know what to believe in with regards to this situation, as I stated before both sides have actors playing their parts. For instance, Vice President Joe Bidens son has been sitting on the board of directors for Ukraine largest gas company. Seriously like this alone isn’t suspicious enough?!

Personally, I am for the people, if they truly wanted to be closer to the EU, then particularly at that time, I was all for them. If it was to be closer to Russia, then let it be so. Politics is never about the people and it’s always us that get hurt by these few with ultimate power. It’s interesting how your opinion changes once you awaken to the sinister games that are being played at the top level of geopolitics. Things are never as they seem.

For instance, I thankfully awoke to this awful situation we live in before the June Brexit referendum, and I found out a lot of information on how the EU was ‘actually’ run. My partner is from the continent, and we both believed the UK would be better out of the EU. Having watched what transpired following the decision to Brexit by the people. Merkel and Hollande start promoting and pushing for an ever closer union. In the form of stripping all remaining countries of their sovereignty and creating a giant borderless superstate! Getting closer to the EU isn’t a good thing, in fact, it’s looking more and more like the EU is collapsing. More and more people are waking up to the situation one way or another. Many EU countries have suffered and have had enough of the elitists ruling the from the shadows.

So with regards to Canada, now jumping on the bandwagon as part of NATO sending over a minuscule number soldiers ( comparable with what Russia has waiting on their side) is nothing more than promoting more rhetoric and propaganda against Russia.

What I’ve seen, is Russia being very cautious and calculated with their approach to this situation, and when too much pressure is applied, they move a couple hundred thousand troupes to the ‘THERE’ border as an asymmetric reaction to what NATO have been doing. I do think the moving of nuclear weapons was taking it to another level, but a message was certainly sent and the situation, unfortunately, continues.

I do not believe Russia has any intention of invading Europe, none what so ever. They trade with the EU and provide massive amounts of energy in the forms of oil and gas. They further enjoy relationships on agricultural, material and financial trade. Honestly, it’s in no one’s interests to be causing this mess and going to war. It’s always at the whim of politicians that men, women and children die and suffer in the acts of war.

All this is, is the Cabal elitist Satanists pushing on Russia, China and elsewhere to start a war. Their money magic system is collapsing, and  history shows when this happens they usually press war to divert attention from the mess they’ve created. The people have to endure harsh times in recovery during and post war, all in aid of making more profit from military sales and resetting the system.

They have also been pushing the idea of massive population reduction, 90% globally. Starting a nuclear world war three with Russia and China would certainly help them achieve a 90% reduction in population and everything else living on the planet except cockroaches.

I suppose that last sentence was rather apt, cockroaches of either kind, actual or people (hiding in underground bases) will survive that type of catastrophic calamity. They’re the most selfish kind of person, very much service to self. They honestly believe they are doing the right thing, by removing us useless eaters from the planet, a civilisation that’s eating itself from the inside out in desire, disease and disarray. Which they’ve mostly caused and fomented over centuries of rule and tyranny.

I am digressing, the new deployment is again nothing more than show and tell. 450 soldiers really aren’t going to help much if Russia was determined to say invade a Baltic state – with a standing army of well over a million at their disposal.

Believe in the positive, strive for the best and want to love one another. We’re all different, but we don’t want to kill each other. Promoting positive thoughts holds more power over reality than any of us can image. Fear is a control mechanism and a waste of energy, don’t fear for it only feeds these groups trying to destroy the world.