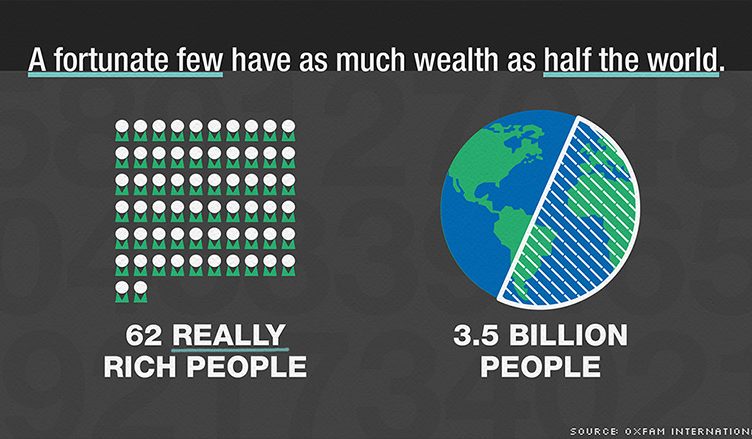 Recently the 2016 Global Wealth Report has been published by the Credit Suisse Research Institute detailing the breakdown and it doesn’t look good. 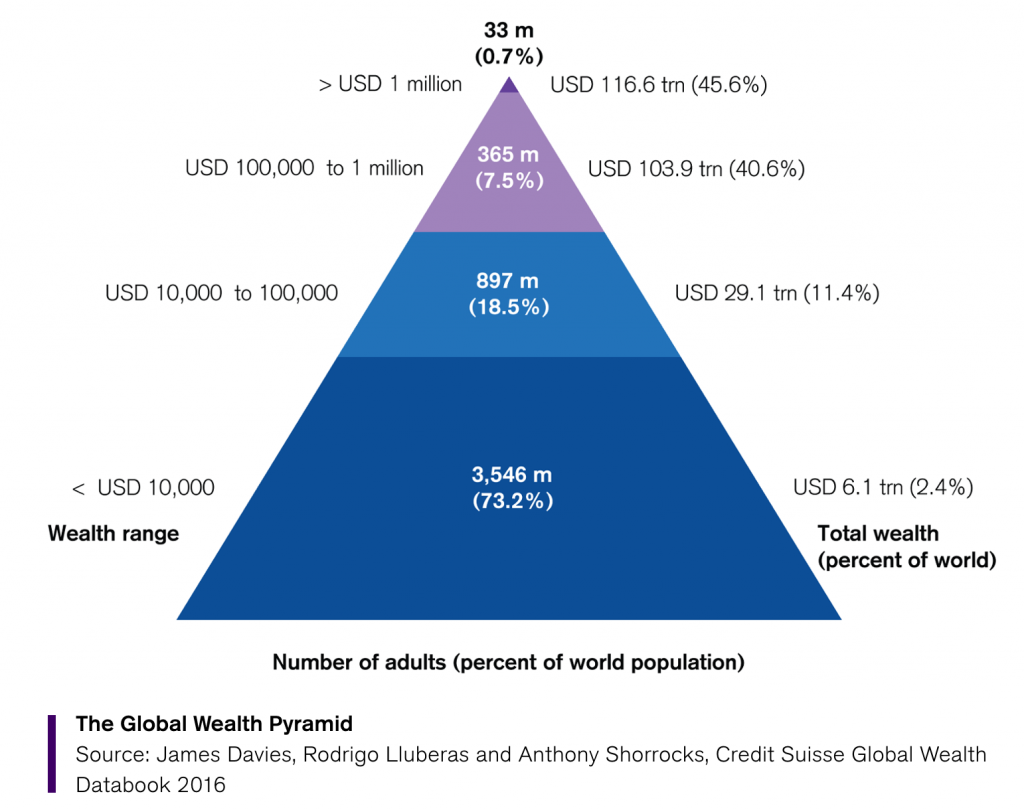 According to the report found here, the top 8.2% of the population own and control 86.2% of the global wealth. That’s just 398 Million people of out a recently revealed total 7.4 Billion! The divide between have’s and have not’s has only ever increased year on year. 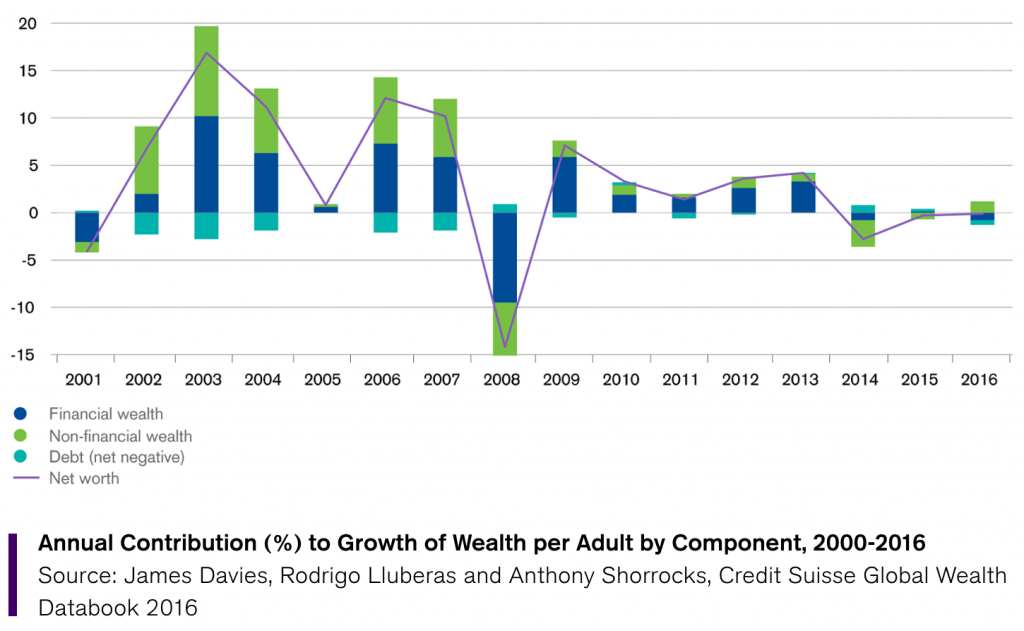 This chart starts from the back of the dotcom bubble crashing back at the turn of the century. In fact in the new century people managed to pick up wealth with other markets ballooning like the housing markets. However, derivatives markets and the like have only ever sought to serve the people at the very top of the financial markets.

It’s clear how devastating the 2008 crash was, just how much wealth it wiped off the general public. Of course in every crisis there are winners and losers, it just so appears from this report to confirm that it’s the general populous that has suffered the most, while the wealthiest continue to get richer with each economic disaster.

It’s hardly surprising that the people at the top of all the ladders albeit Politics, Finance, Business who are wholly responsible for this Ponzi scheme money system we live in, to engineer more events to strip mine away any remaining wealth that’s left.

So where does the money live

The report also details a breakdown of where in the world the money is accumulated. 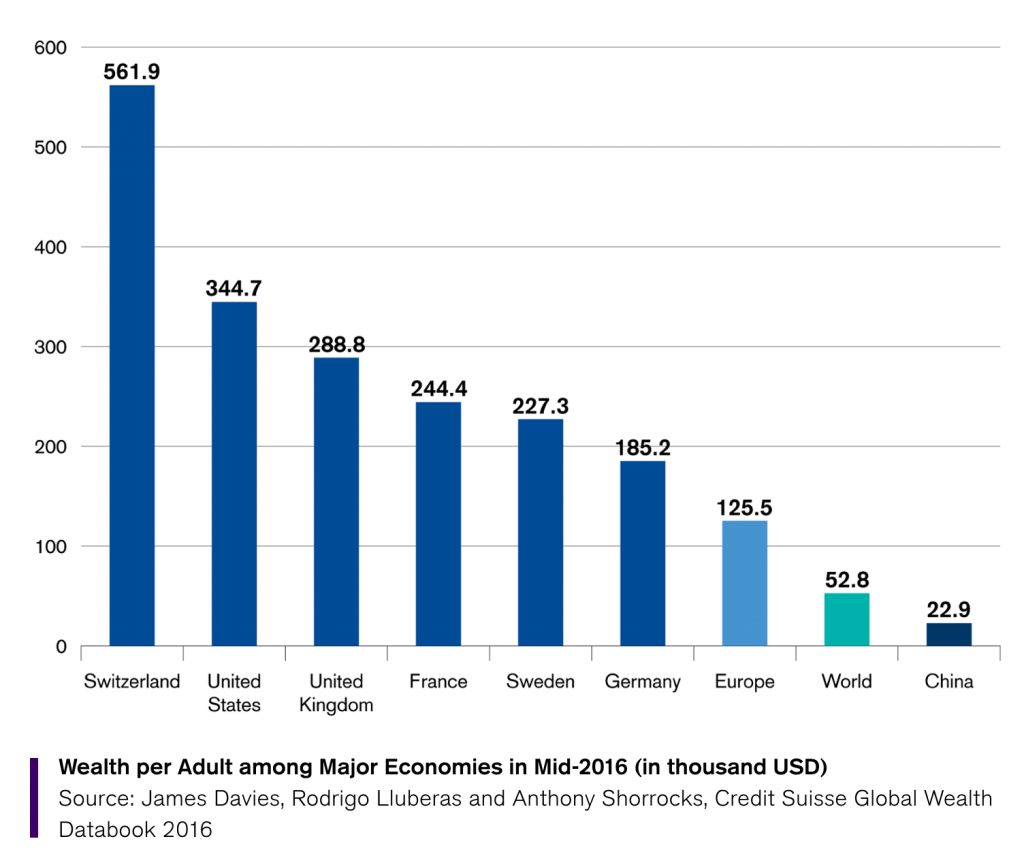 As you can see the  wealthiest citizens live in the usually renowned financial countries. The average citizen in Switzerland has 11 times the global average wealth. The UK might be 3rd on this list, but the vast scale of the inequality is so significant that over 5 million people require the aid of food stamps and shelters. Many millions more are in complete hardship that they rely on the system to survive. Many, more millions on top of this are working full-time jobs, which still don’t bring enough money in to support a family living, as such the state supports and props up these people too. All in all the system is in such an appalling state, the number of individuals that don’t know or realise the gravity of the situation are a small percentage towards the top, living a comfortable lifestyle and taking their information from the mainstream media. The rest of us don’t need to be told, we’re feeling it first hand and are now disbelieving the media and governments in record numbers.

The world’s wealth has been selectively collected by a minuscule proportion of the global population, and it’s being felt more and more all around the world. Wealthy countries are starting to feel the squeeze as they find less and less work and ever more of the population is living off of credit to survive each month pushing the debt bubble even further.

No, it can’t, at some point at the behests of the elite central bankers they will collapse the system. Forget the 2008 crash, or even the great depression. This financial downfall will be of epic proportions; there is never enough money in circulation to pay the world’s debts, and all countries are overrunning their debt to GDP ratios. See NationalDebtClock for break-down of this impossible and unrepayable debt the world has accumulated it’s currently over $67 trillion.

All the banks around the world are in a mess, as if the trillions of wealth generated at tax payers expenses worldwide 8 years ago wasn’t enough greed for these monsters, they’ve got worse and gambled it away into a quadrillion dollar global derivatives market bubble waiting to burst.

Already the economists are predicting this downfall occurring at any time within the next 12 months. The whole system is running on life support with the likes of huge stimulus packages being run by different countries central banks. Some countries like Europe and Japan are already in negative interest rates! Just these two countries combined are adding $120 billion a month into their economies just to keep it stable. Here is a report showing the EU created €700 billion in 2015 through QE. Awaiting the command from evil bank central to cut this life support and crash the system.

But the stock markets are at all-time highs

Sure they are, but they are also artificially propped up, there has been much research done in the past that shows that the stock market is artificially manipulated by super fast programming and artificial intelligence. This will be the last collapse, the last stop for the system, once they pull the plug the stock market will fall so fast. People will not know what hit them. It will be global, and it will affect the economies in every country, 90% of the population are ill-prepared for such an event, myself included. All fiat currencies in history have failed, and the current system is on track for a major collapse.

The last thing to go before a crash is visible is the stock market, once that free falls starts and gold/silver start to rocket, you know it’s begun, and it’s most definitely time to prepare if you haven’t already done so.