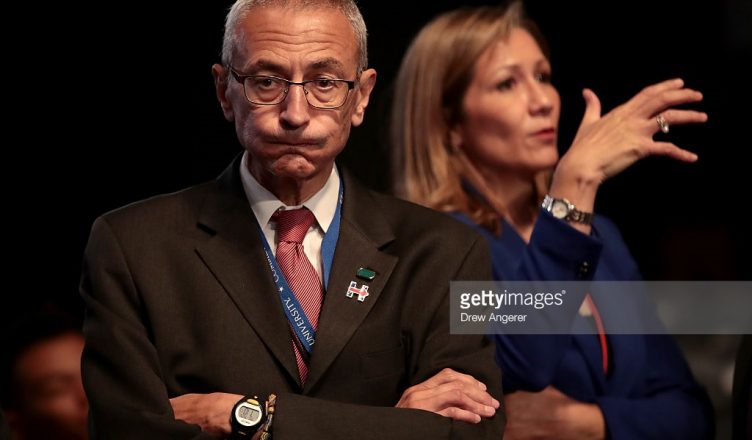 Recently Wikileaks has released all of the hacked emails from Clinton campaign head John Podesta. Contained within these leaked emails is revelations of ETIs, Alien craft, Space Treaties and disclosure attempts. This leak is pretty obvious that high up governmental officials not only have known about Aliens and the UFO phenomena

There really has been quite a bit of leakage for the Alien Disclosure movement and I am going to catalogue here what’s been found and the potential significance of each find.

John Podesta clearly has insider knowledge of the Extra Terrestrial and government interactions to some level and he clearly wanted to be part of a disclosure taking place. This is the tweet he sent out on his last day in office as Senior Advisor to President Barack Obama.

Honestly, this is pretty damning and gives credit to the Extra Terrestrial cover-up that’s been on-going for decades. No doubt this was white-washed by the mainstream media in an effort to conceal the truth. With the recent leaks of his hacked emails, evidence of disclosure is starting to appear.

Tom DeLonge, lead singer of band  Blink182 has been pushing for disclosure for a number of years. Earlier this year he released a book entitled Sekret Machines: Chasing Shadows. This book is to be part of a large collection that will ultimately be further developed into documentaries. He is trying pretty hard to get disclosure on Extra Terrestrials and Secret Space Programs.

Within his book, DeLonge makes mention of an unnamed General who has been instrumental in assisting Tom with getting a team of advisors from top positions to help promote disclosure.

It appears that the unnamed general has been uncovered, as an email from Delonge to Podesta titled “General McCasland” has been found:

He mentioned he’s a “skeptic”, he’s not. I’ve been working with him for four months. I just got done giving him a four hour presentation on the entire project a few weeks ago. Trust me, the advice is already been happening on how to do all this. He just has to say that out loud, but he is very, very aware – as he was in charge of all of the stuff. When Roswell crashed, they shipped it to the laboratory at Wright Patterson Air Force Base. General McCasland was in charge of that exact laboratory up to a couple years ago. He not only knows what I’m trying to achieve, he helped assemble my advisory team. He’s a very important man.

John Podesta has been mentioned before by Tom DeLonge in reference to assisting with disclosure and is well documented with assisting initiatives for disclosure.

So who is General McCasland? Major General William N McCasland is a retired general from the USAF.  Below is an excerpt from www.af.mil about him.

Maj. Gen. William N. McCasland is the Commander, Air Force Research Laboratory, Wright-Patterson Air Force Base, Ohio. He is responsible for managing the Air Force’s $2.2 billion science and technology program as well as additional customer funded research and development of $2.2 billion. He is also responsible for a global workforce of approximately 10,800 people in the laboratory’s component technology directorates, 711th Human Performance Wing and the Air Force Office of Scientific Research.

General McCasland was commissioned in 1979 after graduating from the U.S. Air Force Academy with a Bachelor of Science degree in astronautical engineering. He has served in a wide variety of space research, acquisition and operations roles within the Air Force and the National Reconnaissance Office. He commanded the Phillips site of Air Force Research Laboratory at Kirtland AFB, N.M., and served as Vice Commander of the Ogden Air Logistics Center and the Space and Missile Systems Center. He previously served at the Pentagon, first as the Director, Space Acquisition, in the Office of the Secretary of the Air Force, and then as Director of Special Programs, Office of the Under Secretary of Defense for Acquisition, Technology and Logistics. General McCasland holds a doctorate degree in astronautical engineering from the Massachusetts Institute of Technology where he studied under a John and Fannie Hertz Foundation fellowship.

Clearly, he is a very smart man who is a scientist and engineer as well as a general. To note here is he is responsible for handling extremely large corporate and military contracts via laboratories with over 10,000 people. This appears to be a massive operation, however, this man was only responsible for $4.4 billion, of which the US military spent $6.5 trillion on unacknowledged black operations last year alone. What would be far more interesting is uncovering what technologies he’s been in charge of overseeing during his time. Looking at his education, he’s an expert in astronautical engineering and has continued this distinguished career. For more information about him see this link.

However, he also appears to be assisting the disclosure movement with the likes of DeLonge. So having someone with such senior positions including Director of Space Acquisitions and Special Programs and ending as Commander, Air Force Research Laboratory Wright-Patterson AFB. He is clearly going to be knowledgeable on a number of subjects to do with special access programs, for which he will of been compartmentalised.

For a little more information on the above see this post on exopolotics.org.

Another rather telling set of emails to John Podesta come from the former Apollo astronaut Edger Mitchell, making Skype appointments and providing draft documents on banning weapons from space. Furthermore, he outlines that the positive Extra Terrestrials will not allow weapons in space and them providing zero point energy.

Because the War in Space race is heating up, I felt you should be aware of several factors as you and I schedule our Skype talk.

Remember, our nonviolent ETI from the contiguous universe are helping us bring zero point energy to Earth.

They will not tolerate any forms of military violence on Earth or in space.

The following information in italics was shared with me by my colleague Carol Rosin, who worked closely for several years with Wernher von Braun before his death.

Carol and I have worked on the Treaty on the Prevention of the Placement of Weapons in Outer Space, attached for your convenience.

<= Removed a number of linlk, see link below for all of them =>

We’re arguably closer than ever to war in space. Most satellites orbiting Earth belong to the U.S., China and Russia. And recent tests of anti-satellite weapons don’t exactly ease the scare factor.

It sounds like science fiction, but the potential for real-life star wars is real enough. It’s just not new.

Fears of battles in space go back to the Cold War and several initiatives, like President Reagan’s “Star Wars” missile-defense system.

Deputy Defense Secretary Robert Work spoke to Congress in June about the threat. He said during a speech the technology the U.S. developed during the Cold War allows it “to project more power, more precisely, more swiftly, at less cost.”

Take a moment to think about everything satellites do. GPS, surveillance and communications all depend on them.

And the Scientific American notes you can disable satellites without missiles. Simply spray-painting lenses or breaking antennas is enough.

And a former Air Force officer told the Scientific American most of the United States’ capabilities in space have been declassified to send a clear message: There are no rules for war in space.

6th man to walk on the Moon

Dear John,
As 2015 unfolds, I understand you are leaving the Administration in February.
It is urgent that we agree on a date and time to meet to discuss Disclosure and Zero Point Energy, at your earliest available after your departure.
My Catholic colleague Terri Mansfield will be there too, to bring us up to date on the Vatican’s awareness of ETI.
Another colleague is working on a new Space Treaty, citing involvement with Russia and China. However with Russia’s extreme interference in Ukraine, I believe we must pursue another route for peace in space and ZPE on Earth.
I met with President Obama’s Honolulu childhood friend, US Ambassador Pamela Hamamoto on July 4 at the US Mission in Geneva, when I was able to tell her briefly about zero point energy.
I believe we can enlist her as a confidante and resource in our presentation for President Obama.
I appreciate Eryn’s assistance in working with Terri to set up our meeting.
Best regards,
Edgar
Edgar D. Mitchell, ScD
Chief Science Officer & Founder, Quantrek
Apollo 14 astronaut
6th man to walk on the Moon
PS Terri’s cousin by marriage and former Mayor of Chicago Jane Byrne died recently. Raum Emmanuel was at her funeral.

This later email was delivered to John that same day a number of hours later.

What’s most interesting here is the revelation that the Vatican is more than aware of the Extra Terrestrial presence. This isn’t too surprising as the Vatican actually spends quite a bit of money on astrophysics research, check out their LUCIFER instrument and numerous telescopes. I think the Vatican is far more aware of the ET issue than most governments are.

Also popping out of this email other than the pair arranging meetings to discuss disclosure and free energy is the part about Obama. He mentions speaking with a childhood friend of Obama and setting up a meeting with the President.

Since this was back in January 2015, clearly, John didn’t set up this meeting, or if he did, Obama rejected the course for disclosure at that time?

So what does this mean?

Clearly, that Extra Terrestrials do exist, for me, this is not surprising. I have always believed that ETs do exist, it’s a statistical certainty. Hearing these revelations from leaked emails like this is both exciting and disappointment. Obviously, a number of different groups have been pushing for full disclosure, and yet this has yet to transpire fully. One thing for certain is that these leaks from Wikileaks are just the tip of the iceberg. Wikileaks is presenting over 1 million documents over the course of the next few weeks. This information was gleaned from only a couple of thousand emails, there is surely way more to come.

The real truth for sure is much weirder and far more in-depth than any of us can imagine, the level of secrecy and compartmentalization is of astronomical proportions. Some whistleblowers have said that the security of containing secrecy costs as much as 10 times more than the research itself costs. Something one or something thing is going to tremendous lengths to keep this highly controversial question a secret. However the cat can not only be heard and seen struggling but as we inch closer each day, soon it will free itself and get out the bag! Disclosure is happening all around us right now, it’s just drip, drip, drip kind of disclosure. Rather than the full disclosure we all want to see.