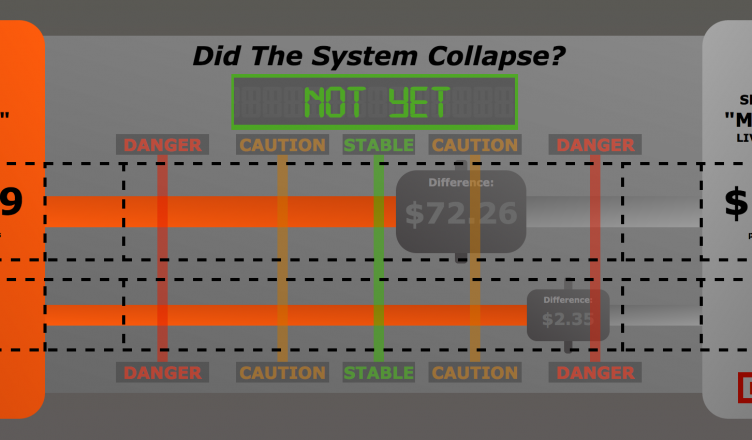 What’s happening to the price of gold & silver?

Update: The author wasn’t aware at the time that the Chinese had a week long bank holiday, the cabal clearly manipulated the markets in their favour. Information in this article is still relevant and just supports the article’s point of complete market control.

As you can see from the image above, the gold price in the west has started to collapse against the stable china yuan (which is gold backed). One of the main reasons for this is that the dollar is not backed by anything. Also, the west has been trading gold as paper in a fractional way which is fraud.

Deutsch Bank as we have seen in the last week has been struggling with its news of being fined $12 billion by the US government. The price of Deutsch bank stock has dramatically declined to a third of its 52week trading price. There also seem to be a blatant market manipulation of this collapse to sway the market to rallying upon aptly timed news.

What’s so important about Deutsche Bank?

Deutsche bank is one of the largest international trading banks in the world, it’s the biggest bank in Germany and Europe. Giant banks like these tend to be more than a single entity and have many trading arms and sister companies. They also trade and loan with other banks around the world and as such become intrinsically tied in a giant web of interconnectedness.

As you can see from this graph from the IMF all these banks are highly intertwined with each other. If a monolithic bank such as Deutsche bank collapses it’s going to have a massive knock on effect with all the others. Think Lehmann Brothers back in 2008 but on a much grander scale! Deutsche bank is also part of the derivatives market like most major players and has enmassed a whopping $48 trillion in derivatives alone, this is only 12% of the total derivatives market. Fortune.com has more on the Deutsche bank train wreck

Why is Gold so low in the west?

My guess here is this is a last ditch attempt by the elite and central bankers to cash in on their hoards of paper money and get into tangible wealth with precious metals, since they control the system they can throw more paper gold at the market to deflate the price and get better price with any traders still with stock.

Anything that happens within the financial markets is usually controlled, it has been said that the stock markets are actually controlled by the actions of AI programs and it’s been going on for more than half a decade! More can be read on flash trading and spoofing what’s being seen in the markets.

But this is nothing new the Rothchild’s did this to the Bank of England back during the battle of waterloo. Fake information and ripe timing is the signature move of these elites and now they’ve got AI doing it for them.

Benjamin Fulford reports that a document dump shows how the US Federal Reserve back in 2008 set up a fraudulent scheme to use 700 tonnes of gold and market it as 700,000 tonnes as derivatives. The level of corruption these banks will go to is seemingly unlimited.

Dave over at the X22Report is opening his report saying how the bankers are rigging the gold markets.

So throwing more paper money at the gold and silver markets will create artificial deflation as the banks don’t own these metals in the quantities traded. Deutsche Bank is having problems delivering right now. Cheap prices for all elites with access and control over dealers and they convert their assets to something a little more protected. Since China is dumping US Treasuries and loading up on cheap Gold in the west, they aren’t going to complain about this opportunity being set. Also since the yuan is seen as strength being backed by gold and now being accepted into the IMF SDR basket of currencies at 11%.

What we see here is Deutsche Bank has all the hallmarks of Lehman Brothers back in 2008, literally!

They are going to offload all the bad on to Deutsche Bank and collapse it in a way that protects the central banker’s interests. These people don’t care, they’ve been printing money like it’s wallpaper to the tune of $120 Billion in quantitative easing (QE) each month. QE is the printing of large volumes of paper currency and injecting it into the markets in the misguided attempt that it will help prop up the markets and economies. This is hyper-inflation and the actual value of the currency is being errored enormously. The entire system is based on debt creation and then spreading it out to all the banks, business and people in a giant Ponzi scheme with the fat cat private central banking families at the top.

This system was never designed to last, it was designed to milk everything and every one of their assets by enforcing ownership of almost everything we own by debt. This spreading out to the corporate world just as much as the public sector. The land is being brought up in very large amounts by foreign countries all around the world. It’s all about building massive bubbles and then bursting them taking all wealth away.

All the countries around the world are insolvent, every single one! The global economy has already been in a recession, masked by fake manipulation of statistics to control the status quo. Shortly, maybe imminently we are all going to get a nasty shock. The banks will all collapse, the government can’t bail them out, the banks being too greedy will bail-in! Taking all our wealth away from us, restricting access to what may even be left to limited the effect of bank runs. Worse of all, governments who are all indebted by a massive amount will collapse by implementing marshal law. This is the NWO agenda 21 plan for a one world government, bank and military – this will be their solution to their manufactured crises.

What can we do?

For a long time now economists have been ringing the warning bells and telling us this is coming. Here is a short list of the things you should be doing  to prepare for this event, which will be chaotic, to say the least.

I don’t want to panic anyone but we really are entering a serious situation be really do need to get prepared as best as we can. As much as we can afford, most people can’t even save money each month, so preparing is hard. Here I would say get a large bag of rice, some tinned food, bottled water, camp stove, light and toilet roll.

By spreading the word and informing people as to the impending collapse and possible war that will ensue. Waking people us is the single most important thing we the public can do. I am sure there are people out there in law and military who are trying to remove these people. All these data dumps are giving sorely needed evidence against these elites who have been squeezing us to death.

For me, I want to share what’s happening and the situation as it currently is. This website is my participation in helping to awaken the masses, alternative media is now more important than ever. Please share this page and site with your friends and family, post it on your social media, talk with one-another. Our collective consciousness can be raised the more we share and discuss, doing so will bring much-needed attention one these people. We’ve been repressed by these groups for hundreds of years because of their control. They can’t control all these alternative sources, social media and all of us teaching each other the truth.

I hope that all my readers be safe and aware of what’s coming.