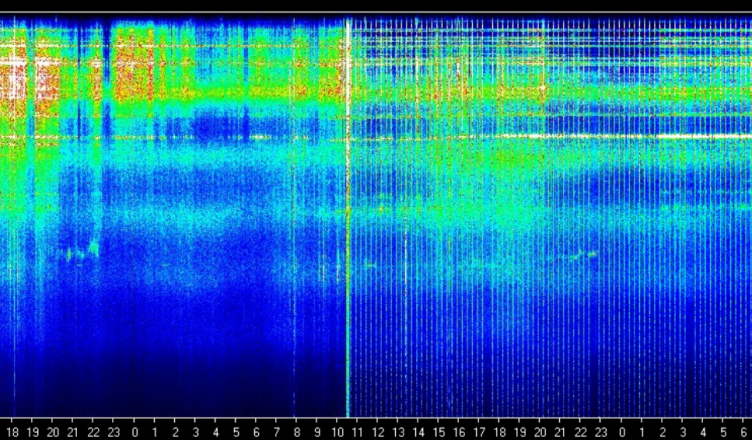 What on earth is earth doing?

I like to keep an eye on the following website as it produces live data on the Schumann resonance in a lovely spectra-graph view, whilst also presenting many different charts of the data. The frequencies I am interested in are a product of lighting worldwide affecting the ionosphere cavity with earth. It’s been said that this Schumann resonance affects all living creatures on earth in a subtle but life supporting way. Recently I’ve noticed two changes within this data which could be pointing to something artificial.

. It’s recently come to my attention that the Schumann resonance isn’t increasing at all. It’s fluctuating within a small variance, which isn’t really surprising as the ionosphere is just one layer of a highly dynamic atmosphere. For more information on why the Schumann resonance isn’t increasing please see this article over at Stillness in the Storm. It does a good job of detailing how it’s not actually increasing and therefore if some websites are purporting that it is increasing and this is linked with the ascension event, they’re simply wrong. On a personal note, I’ve been continuing to watch the below website nearly daily since before this article was originally posted back in October 2016 and can also confirm that there is not a general increase in the Schumann resonance.

I use the following website to check on how this is changing in real-time. Check here for the translated website it’s in Russian.

On the 29th September 2016, the Schumann resonance hit a new high. I don’t know if this is the highest it’s ever been recorded in its primary mode of frequency, however, it’s certainly an indication of the fluctuations that earth is experiencing. Could this be a side effect of the ascension process that earth is going through? Or maybe it’s got something to do with the on-going resistance/cabal fighting that is supposedly going on all around us, yet just out of sight. Schumann Resonance is produced as a byproduct of the continuous lightning strikes that are hitting the earth (approximately 100 every second).

Maybe this is simply caused by the changes in solar activity. Recently earth has been going through large magnetic storms which have blown off from the sun. This is bound to have an effect on the planet and highly likely within the atmosphere. Causing increasing electrical charge and therefore more lightening and Arora Borealis activity.

Either way, the new high is certainly something to keep an eye on even if it just a peak and has subsequently levelled out.

Since the 1st October 2016, something new has started to show in the data on the spectra-graph, highly regular intervals of spiked energy across the monitoring range. I’ve seen this spiking across before many times but not like this. The new regularity is of serious intrigue as it’s very periodic and appears to be staying! It’s also across the entire frequency range of the recording device. I wonder how long this is going to last for? This is NOT lighting and there is order here. Perhaps this is a real indicator of a new wave of energy coming from the galactic heart as prophesied in the major ascension cycle? Does this mean there is now sufficient numbers of the public becoming awake to the truth and it’s now activated?

Or is it far more sinister? This pattern looks artificial it’s just too highly regular to be something natural and is possibly something to do with the HAARP experiment that’s based in Alaska. It has the capacity to cause something like this to happen and there does appear to be an increase in storm activity going on with both America and Japan that looks a little artificial. But this is my speculation, also remember that other countries have their own versions of the HAARP project.

Honestly, who knows? We’re in a magical time of disclosure and unveiling maybe this new pattern is to do with this, we certainly need to discover more truthfulness of our past and present. Maybe it’s some kind of weapon/experiment being used. Around the world, we’re seeing volcanic and tectonic activity increasing rapidly, many birds and animals are dying in large numbers. For now, I am happy believing that Earth is more than conscious enough to deal with this change in any manner that’s not likely to harm all life – we are her and she is us. I will be continually watching this development and giving meditation to Gaia (Earth) in support and love and hoping that the NWO depopulation agenda is not gearing up.