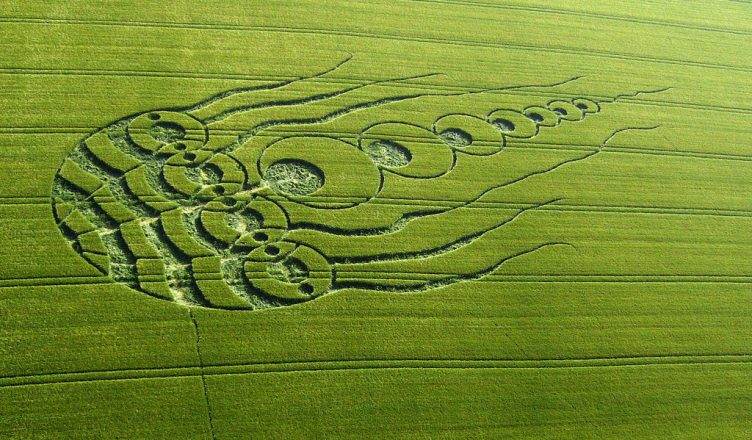 If you’ve never seen or heard of crop circles before then you’ll find everything you need to know right here. They are large depressions of crops found in farmers fields, usually within grains but not limited to these as they’ve been found within vegetable crops as well. As you can see they are pretty elaborate usually consisting of a number of geometric shapes interlocking with each other building a large picture within the crops. They are best seen from the air due to their size and placement, however, many people enjoy going to walk around them as they believe they are caused by an extraterrestrial presence.

Not all crop circles are from E.T.

This is where the debate starts to get a little interesting as there are known & unknown groups that will take to a field in the night, usually without the farmer’s permission and as a team they will layout a pattern using string guides. Their method of producing these patterns is to use a large plank of wood with string and flatten the crops following the guides. Depending on how big and elaborate the design, it can take a group of 20+ people a good number of hours to complete. Apparently, according to the Daily Mail, some of these groups could be making the circles with parts made from a microwave oven and 12volt battery! http://www.dailymail.co.uk/sciencetech/article-2020910/Crop-circles-Now-ET-little-help-mircowaves-GPS.html

Yes! Firstly because it costs a lot of money in damaged crops for which they will not recover, they attract people which can cause even more damage. Depending on the size the damage bill can range in the thousands! Remember that the value of a harvest is directly related to the upkeep costs, whether there is drought causing lower yields and of course ever increasing costs of fuel.

However not all farmers see only the negative since they ARE a tourist attraction, some have managed to profit on access to visit the circles and allowing pictures to be taken through licencing.  Farmers do lose out on the  normal operating business and tourism isn’t always welcomed.

How long have they been found?

Crop circles have been found dating back as far as 1678 as a news pamphlet “The Mowing Devil” referred to a creature that cut a farmer’s field into concentric circles. During the 19th century man more where being found and as of 1932 photographs have been cataloged.

Interestingly England is a hot spot for this sort of activity, every year approximately 50 – 60 circles found in the Wiltshire area. Compare this with the annual number of 40 – 50 found elsewhere in the world, England really is the place to be if your interested.

Not all of these activities are in the form of circles and geometric shapes, some appear to have encoded messages within them.

Here is a famous case of a crop pattern appearing next to Chilbolton radio telescope in Hampshire, England back in August 2001. The difference here from the normal crop circles is that they are encoded images made from pixels. When viewed from the air you can clearly see that one of them is an image of a face, the other being a highly complex message encoding. If you didn’t already recognize the formation of the message, it’s the same format as the Arecibo message that was sent to space by Dr. Frank Drake & Carl Sagan back in November 1974! It was beamed only one time in the direction of a globular star cluster M13 in the hopes that extraterrestrial intelligence might receive and decipher it. The black and white image above is actually that message sent back in 1974.

The short answer is YES, but the question still remains if it’s from hoaxers or actually from E.T. either way, it is a fascinating situation and also to be found next to a radio telescope no less.  When the crop mark was found  next to a government building CCTV cameras were reviewed and nothing was found, no light or people!

For more information on this particular case see this detailed website. http://humansarefree.com/2011/02/two-most-important-alien-messages.html

Well, this author believes that some of these crop circles are the works of ET’s, they’re just too big and intricately detailed to be pulled off in the few hours of cover by darkness. Many anomalies are found at these sites from burn marks to half-burnt insects, lack of board marks seem to support that they have been laid down by an intelligently crafted energy wave of some kind. Of course many are the works of human hands & minds and are no less interesting as almost always crop circles leave you with that awe factor.